Book Review: Daughter Of The Zel by Phoebe Ritter

April 09, 2020
*I am reviewing these books which I was gifted for free by the author in exchange for an honest review. All thoughts are my own. * 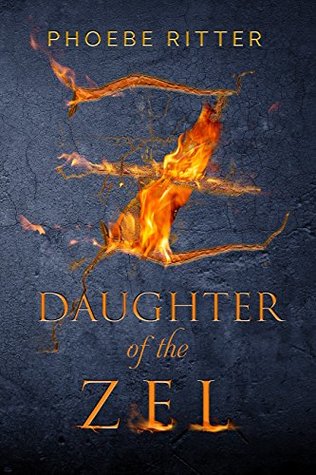 Raised on the border between Nevda and Zel, Efa has two certainties in life.Their country's neighbours, the warlike Zel, are to be feared.Her touch will kill, so she can never leave the island.When Efa is kidnapped and discovers she is half-Zel, certainty will be hard to come by.

When Phoebe asked me to review the book I was quite excited, I don't often read a lot of sci-fi but I normally do connect and enjoy books in this genre. Daughter Of the Zel was no exception as I really connected with the story and I think that I should probably read some more sci-fi!

The start of this book is really engrossing. I was in the story all the way and I was really excited to see where the story was going to go to. I feel like we were with Efa the whole way as her life was changing in front of her eyes.

With this, I felt like Phoebe really built the world up and I was definitely in there with all of the characters. I also really enjoyed seeing all the characters connect to their new worlds and surroundings and seeing this get all uncovered.

The characters were also well-developed especially Efa and we got a real sense of what her reactions her to the situation that she was put in. I think that her the characters that she reacted to were a way to expand the world further and introduce us into this world. They were also just really interesting to read about especially towards the end of the story.

While I did really enjoy the book, I felt like the writing in the book changed throughout. The writing at the beginning felt really immersive and well-edited. It flowed really well and I didn't really notice it but something felt a little different when I got to a different part of the book. I just felt like it was not the same but I got over it and it didn't affect me after that.

I do feel like it does have some typical YA cliches in the book but I don't think that they were a bad thing. I think that the whole 'girl whose touch can kill' is a little bit overdone but I think that it was handled well and was taken in a new direction. While the ending is one that I have seen before, it offers a new approach to the story and leaves it open to explore someone new and exciting. I am therefore really interested to see where the story goes next and will definitely like to see where it goes.

Daughter Of The Zel is a short and quick read that will have you reaching for the next book as soon as you can get it.

Have you read Daughter Of The Zel? Do you want to? Leave it in the comments below.